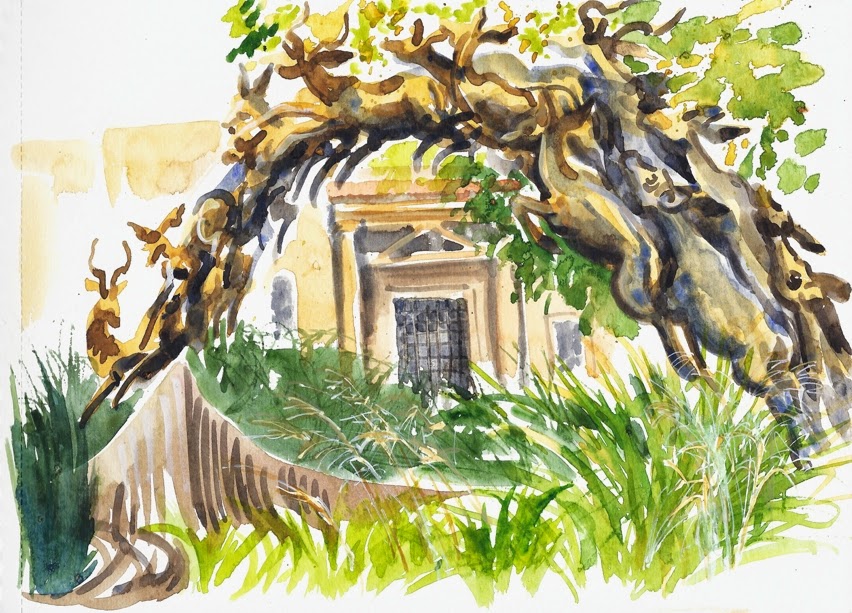 I went with a small group of Joburg Sketchers into the city on Saturday, to the financial district on Main St. I wanted to draw this sculpture which is a replica (or restoration?) of one created by Herman Wald - commissioned in the 60's by Harry Oppenheimer in memory of his father Ernest. The iconic original bronze was located nearby in the Oppenheimer Park, but during a stage of urban decay and neglect was vandalised and presumably sold for scrap.
Anyway, here it is now, looking beautiful  - joyous in summer, as I last saw it, with fountains playing and agapanthus blooming. But on this autumn day with a chilly wind whistling round the tall buildings, me sniffing and snorting with the back end (I hope) of a rotten cold and the statue mostly in shade, all seemed a bit deserted and forlorn, with the Johannesburg Magistrate's Court peering sternly through the grasses. The security guards who stopped to chat assured me that during the week it's a hive of activity, so perhaps I'll go back when it's busier (and in summer when it's warmer.)
The only other interaction I had was with a rather unsteady fellow who wanted to discuss politics with me, but couldn't quite remember the politician's name he wanted to talk about - and also omitted to remove his earphones so couldn't hear my point of view if I'd had one. All in all not the best ever day out sketching, but at least I can tick the Impalas off my to-do list!
Posted by Cathy Gatland at 6:20 PM

Must be a very impressive sculpture. The sketch looks great. It might not have been the best day to sketch but at least you had some good stories to tell ;-)

I remember the original one, my Dad worked for Harry Oppenheimer as the company photographer (Anglo American as it was in those days) and he had to photograph the sculpture. I am so glad that it has been restored, I loved it, the grace and energy of the antelope was wonderful.

Thanks Maike, Martine and Bev - I don't think this sculpture is quite the same as the first, from the photos I've seen online (might be your Dad's Bev!)and driving past it as a girl en route through Joburg - it looks smoother and perhaps smaller, but at least it's not completely lost.

Very nice Sketch! It is definitely one of my favorites! I should try sketching sometime....