When sketching last September at the Spring Day in Killarney Park, I met a funky young guy, Dokter Skruph, who had a stall there. I was interested in a little folding stool he was selling, and he was interested in my sketches - anyway, to cut a long story short, he emailed and invited me (and any Joburg Sketchers who would like to) to come and sketch on Saturday at the Seven Sounds concert. Now, this is not the kind of event I go to ordinarily... way too old, sedate and home-bound to go so far out of my comfort zone to listen to music that I felt sure I wouldn't appreciate... but, although none of the other sketchers could make it, one daughter was keen to go and promised to sketch too, so we ventured forth with our GPS into the network of highways and back-roads to find this new Common Ground venue in the Maboneng District. 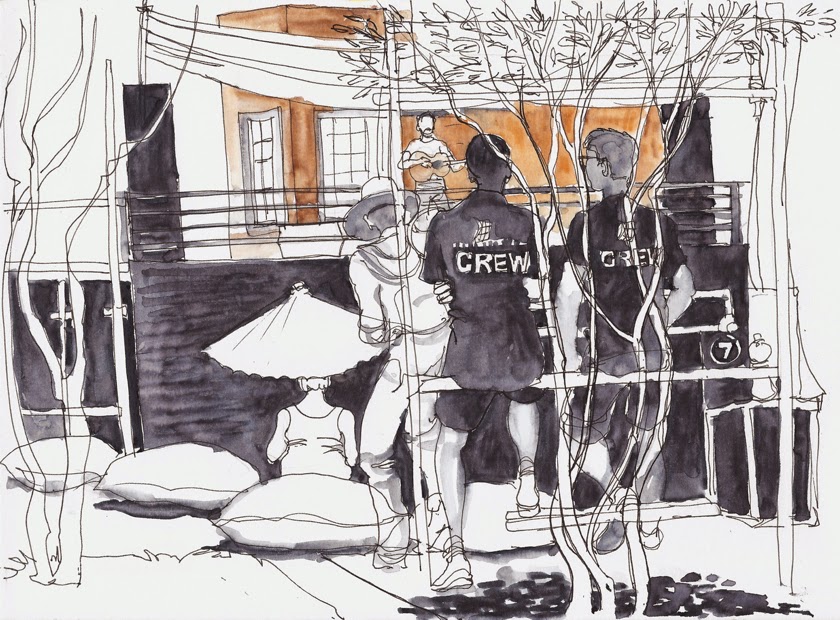 Inside the park from the unfamiliar streets, we found a little patch of grass under an olive tree, shaded from baking sun and the glare of a cloudless blue sky. There were only a few people in so early to watch opening musician Matthew Mole. I needn't have worried - the music from here on was all wonderful and totally easy to love. 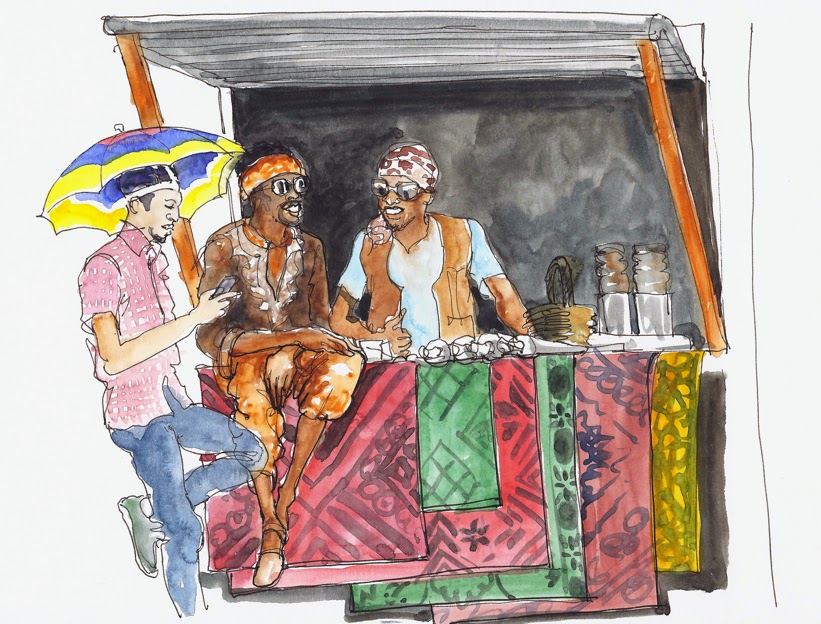 I spotted Dokter Skruph sitting in the hatch of his shop chatting to friends and drew them - a thank you for the invitation as well as the first time I've had a chance to sketch an actual spaza shop, a ubiquitous and typical feature of the South African urban landscape. I hardly noticed it was clouding over... 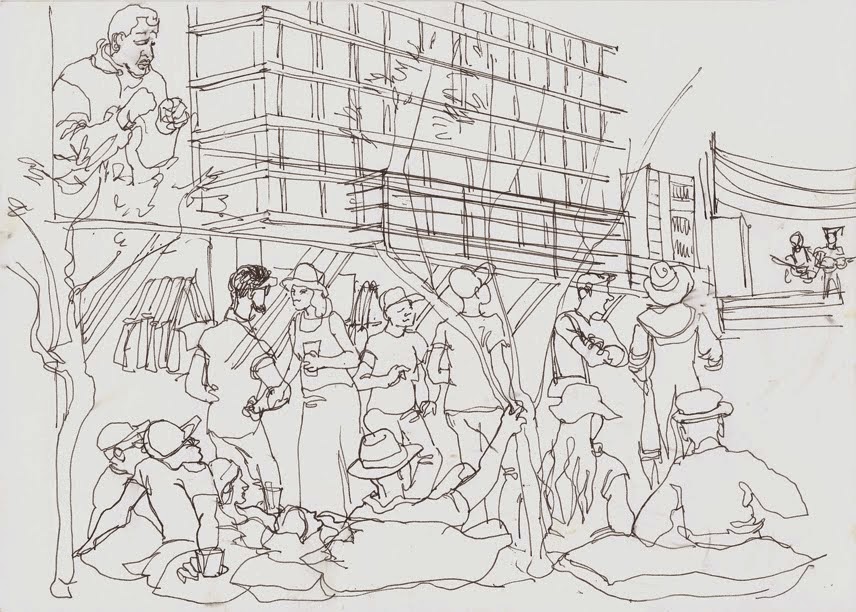 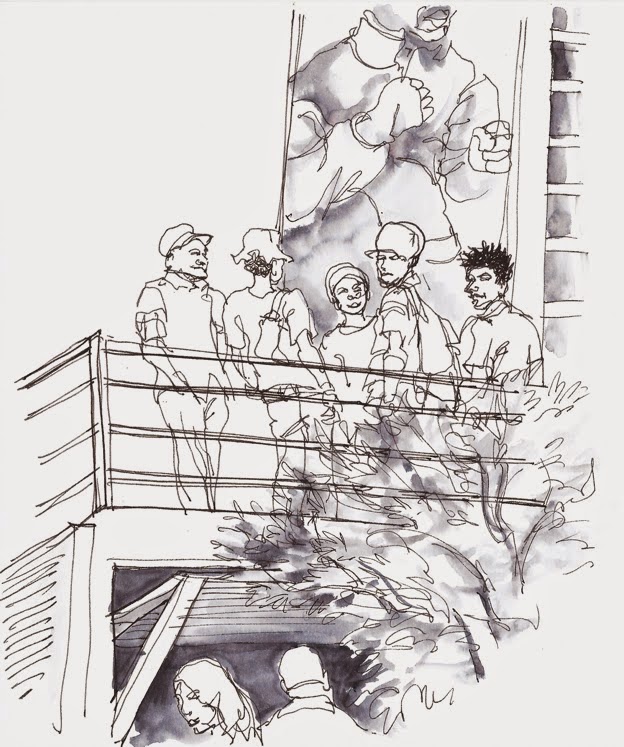 ...until I began on my next scene during the lovely sounds of Shotgun Tori - the smudges and spatters on this one were pitter-patter raindrops and just as The Muffinz, fresh from the Apollo in New York, started their set, the skies opened and Joburg threw down one of her famous, no holds barred thunderstorms which had everyone scuttling for shelter.

After a while the sun and a few determined people started emerging from their cover - here some of the musicians (Tidal Waves, I believe) on the roof with a huge mural of Nelson Mandela in his boxing days on a building behind them, waiting to see if they were going to be able to go on or not. 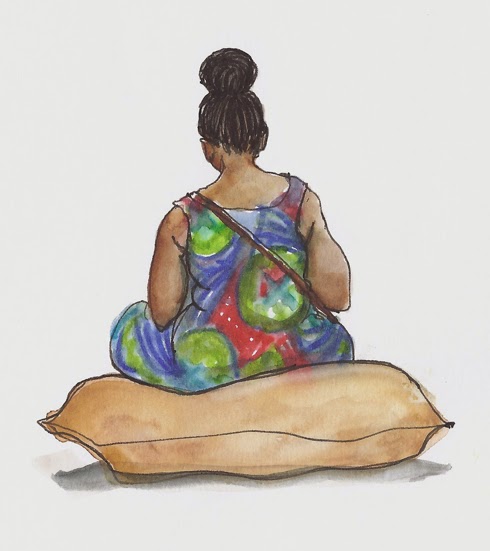 And the audience trickled back with their hessian bag cushions, to wait in hope for the music to start again... which it did, with so cool Guy Buttery setting up a smaller, more movable stage in the middle of the arena to play his astonishing acoustic music on guitar, saw (the woodworking kind) and umm...something that I'm not sure of...a sitar? Before Eskom cut the power and the harassed but well prepared organisers dashed to start up a generator to finish the concert. At which point I had to go, to find my way home before any more storms or darkness fell - but I will be back to listen to more wonderful music (I missed out on a whole lot more - my daughter had found friends and stayed longer) and naturally, sketch. 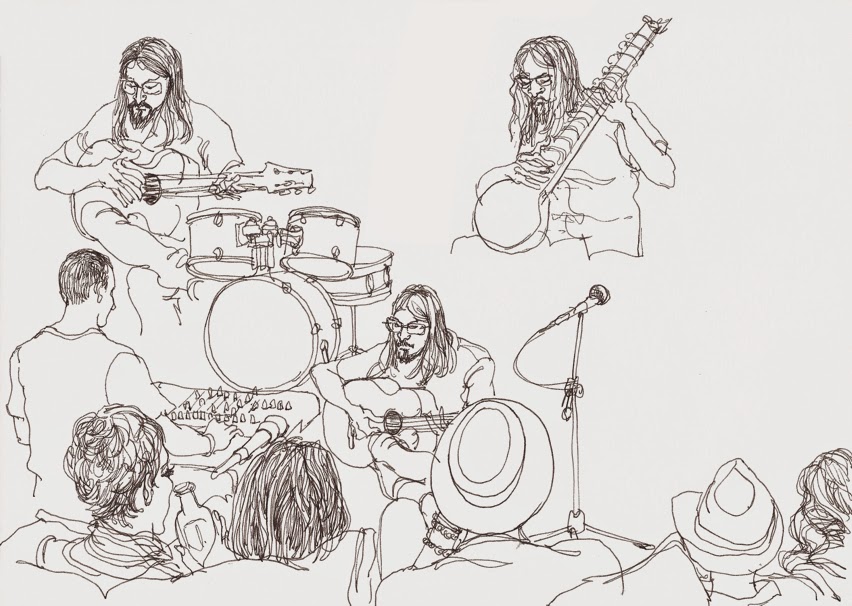 Posted by Cathy Gatland at 1:46 PM

How brave of you to step outside your comfort zone - and what a nice thing, to receive this invitation! Great sketches, as always!

I love the sketch of the musicians. It feels like the band is sitting down and really enjoying the music.

What a wonderful blog post. And I love your sketches of the concert and of the Doktor and his friends.