A Heritage Home and Hotel 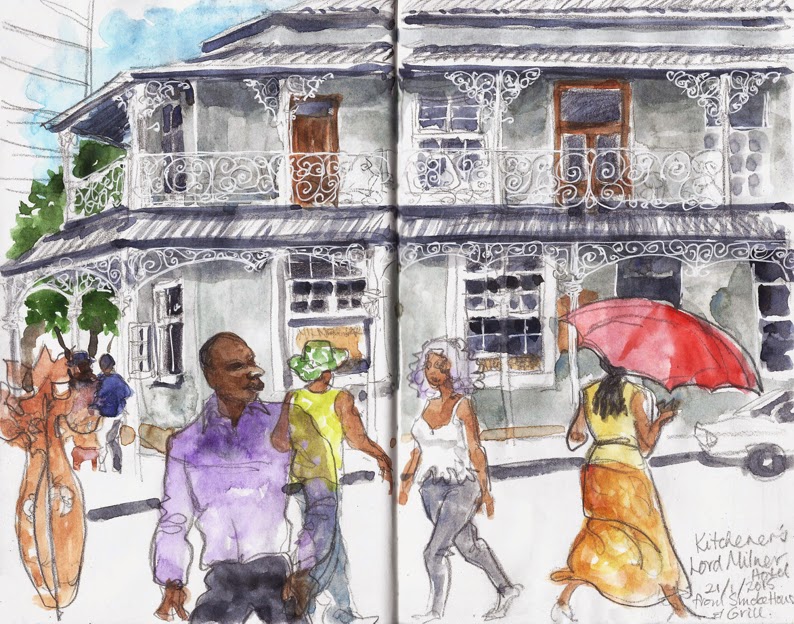 Two sketches of buildings from the same era in Johannesburg's history - the top one is of Northwards, an Arts and Crafts Movement home built for mining magnate and randlord John Dale Lace. His flamboyant wife, José took milk baths and had her coach pulled by four zebras to go shopping in town; was allegedly proposed to by Cecil John Rhodes, and was mistress to King Edward VII. More about this fascinating lady here if you're interested! Sadly they ended up in abject poverty - how does that happen!?
Our sketching group went to draw in the gardens after a week of scorching heatwave, but this day was chilly and drizzly and we eventually had to go and find a café to warm up in. It's still cool - surely summer can't be over so suddenly and so soon?

The other sketch was done after visiting William Kentridge's enormous and wonderful tapestries at the Wits Art Museum, over coffee at a restaurant that had a good view of this little inn which dates back to the Boer War. It was used as a watering hole for British troops, and a stopover for postal riders, and where British High Commissioner Sir Alfred Milner met commander of the British forces General Lord Kitchener for talks in the bar, which gives the hotel its name.

I have to say, I learn more history from sketching and having to look these things up than I ever did as a dozy student doodling at the back of the class in school!
Posted by Cathy Gatland at 12:04 PM

And I learn a lot from following your links!

And we do learn more history reading your words and looking at your sketches than in our classes too!! Beautiful sketches (love the victorian lace iron railings - how would you call them?) in the second! Sorry for not having had time to see you when we came to SA, but it all went in a flash!

Glad we're all learning here ;-) and thanks Cathy - yes, sorry we couldn't get together, I gathered that you were running around fitting a lot into your time here. We call that iron lacework 'broekielace' here (broekie in Afrikaans meaning panties!)

I love how you have tackled the railings on the home, I always struggle with that sort of detail - I must remember this :)