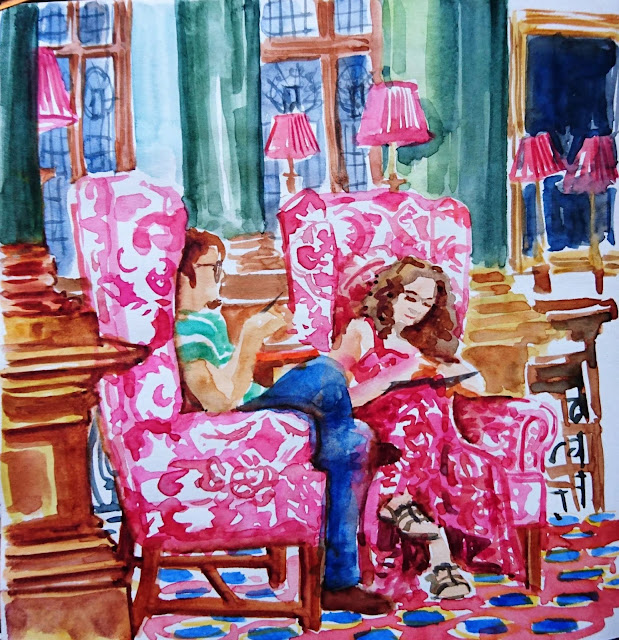 Well, hello - it's been a long long time and I had almost decided that blogging was all in the past for me, when someone (thank you Ginny Stiles!) emailed to say she missed my posts, and someone else needed a link for my sketches besides Instagram - so here I am again. Not knowing where to begin as there's so much I haven't posted and so much has happened... so just starting at The Rand Club, where I sketched on Saturday, and have sketched a few times over the last couple of years... A music and story-telling event (at the bottom), a book fair in 2018 (these three colour sketches) and ending with the recent event for 1000Drawings where we donated A5 doodles or drawings for charity - both with our Joburg Sketchers group. 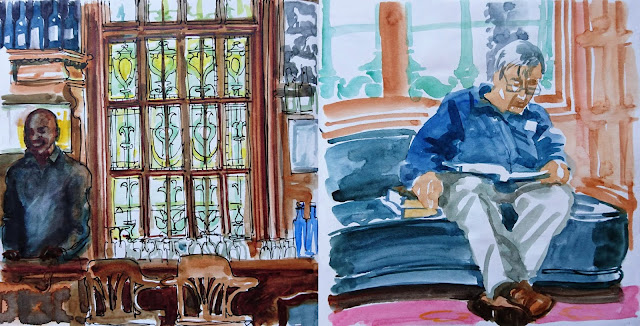 The Rand Club was founded by Cecil John Rhodes and Johannesburg's mining founding fathers with a very restricted admittance and membership policy - basically only wealthy white men were allowed in. When I was a very young art-director's assistant, newly arrived in Joburg back in the late 70's, I went with my workmates for drinks there at the longest bar in Africa - as it still is - and didn't realise at the time that the reason we circled the building to find a side door and not just walk into the main entrance, was because I, a Woman! was present - by then we were allowed into certain rooms, but had to go in the secret door! Since the 80's all may enter, but there's quite a struggle to attract enough paying members into the middle of the city to finance the upkeep and preservation of the quite beautiful building and its features. Now that the admission policy is more ethical, I hope they do.

Apologies for the poor quality of these images - they were snapped with my phone in dingy light before popping into the donation box. One of the reasons blogging became too much, was the time taken to scan and clean up images, and write and research blog posts (the upside being that I learnt a lot more about the city I'm living in) so I'm trying to find ways to do it faster. This post has nevertheless taken me forever, but it's good to be back!

Posted by Cathy Gatland at 2:26 PM

Thank you Sadami, lovely to hear from you!

Hello Cathy. I'm now visiting your beautiful country. And i like to sketch. I'll be in Johannesburg on march 27. 28. 29. Is there a meet between urban sketchers? I Come from France. My blog is https://croqueursquimperlois.blogspot.com/?m=1.
Thank you . Marie odile

Hello Marie,thank you for getting in touch. Our sketchers group has a meeting planned for the 5th April, but - you may have heard - we've just had very drastic measures against the Covid-19 virus outbreak announced so it might not take place. Are you already in the country?.. travel bans also underway, strange and worrying times. If you could email me maybe we could make an arrangement for a small sketch meeting?