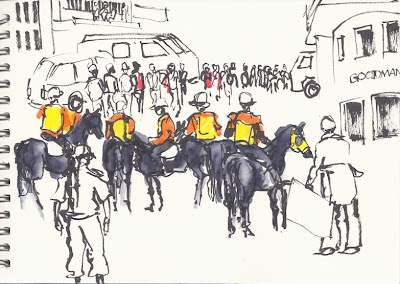 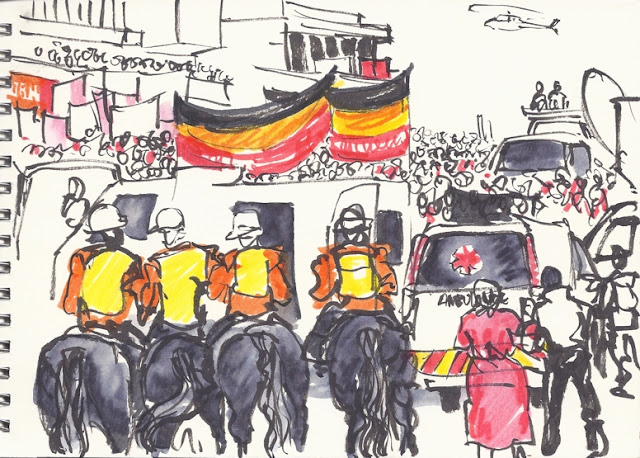 Today a march was held in Rosebank, quite near to where I live, to protest against the Goodman Gallery displaying a "derogatory" painting of the president. I thought that I should be brave and go and do some reportage sketching, though was pretty sure I'd safely chicken out at some stage. But I told my sketching friend Anni about my thought, and she was very enthusiastic, saying she'd meet me around 12... and so there we were! 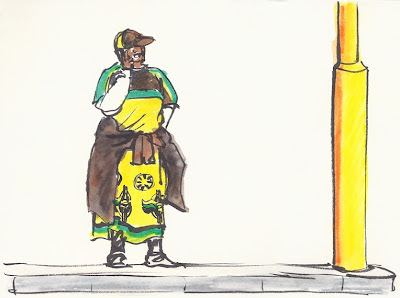 At first there were mostly mounted guards, riot police and ANC marshalls gathered around, which made me nervous enough, but I started drawing them from behind as they gazed expectantly up Jan Smuts Avenue. Then we heard singing and chanting in the distance, coming closer, the mounted police lined up and my heart beat even faster - but there were plenty of relaxed and jovial people milling around, including a cheerful looking ANC protester chatting on her phone on my left - so we carried on sketching as the street ahead filled up. Soon it was apparent that speeches and the odd "Viva" call were all that were on the agenda - it was to be a peaceful, restrained occasion, much to my relief.


When it looked like the main event was over, we walked around the block to see if we could get closer, and found ourselves weaving our way right through the thick of the protesters - all friendly and approachable, two women readily agreeing to sit for us (but don't put the picture in 'that' gallery, they said!) I wish I could have sketched faster and got lots more of the colourful outfits and lively characters. Almost back where we started, we had a last opportunity to sketch the flamboyantly dressed elders, leaders and politicians on the back of the broadcasting truck before the crowds dispersed and we headed for a much needed drink and some lunch. 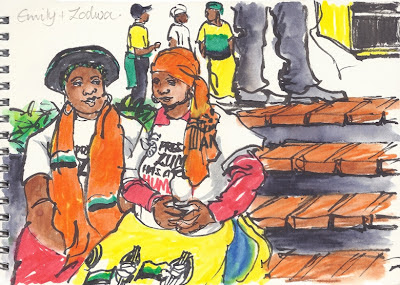 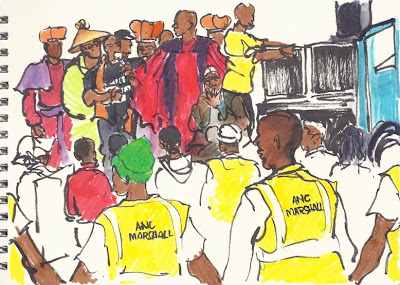 Posted by Cathy Gatland at 7:18 PM

What a wonderful report on the protest, Cathy. 'That' gallery would do well to display your work - always so full of life!

so impressed Cathy - both that you sketched and your wonderful results which indeed capture the event! Great that you have such an encouraging friend!!!

Fantastic! Astonishing work. Good for you for sticking to your plan.

Wow I would never have had the courage to sketch a protest. Kudos to you.